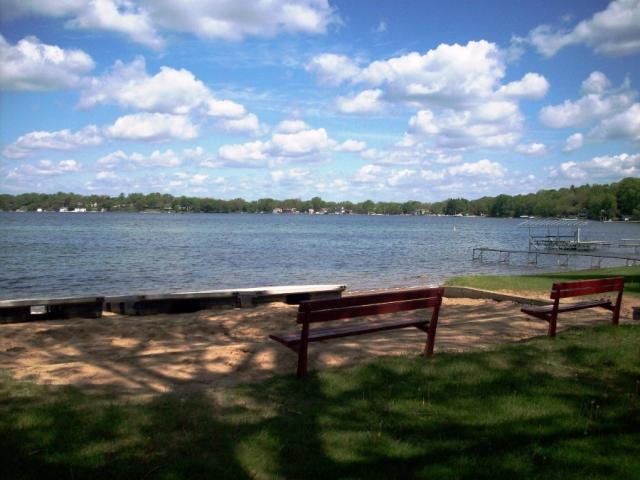 This 450-acre natural freshwater lake offers a little bit of everything, from swimming to water-skiing to fishing to quiet lakefront evenings on the deck. If your interest is sailing, the Powers Lake Yacht Club welcomes new members and is eager to have you join them. And if you prefer to simply kick back and enjoy a lake breeze, that's okay, too!

Powers Lake has no inlet; water enters the lake from ground water and precipitation during rainstorms. Water outflows indirectly to nearby little Lake Benedict and even smaller Lake Tombeau. Eventually the water reaches the eastern branch of the Nippersink River where it finally becomes part of the Fox River Chain in Illinois. Even though there are many homes built near the shore, the lake remains quite clean and clear. Because the lake spans the borders of two counties, a new organizational entity was created to facilitate governance and coordinate water quality monitoring. The District of Powers Lake acts something like a property owners association but with a focus on maintaining Powers Lake to the enjoyment of all. The District concerns itself with monitoring for invasive species, organizing efforts geared toward removing such hazards, and educating lake users about good water management practices.

Two small parks owned by the Town of Randall are located on the southeastern shore. Neither has designated swim areas, and most of the space is devoted to municipal boat slips which may be leased by the season. The public may launch boats for a fee which is slightly higher than that charged to locals. Summer boat traffic can be heavy, with waterskiing, jet skiing, tubing and wakeboarding. All of that ends by sunset, however, when no-wake regulations mandate calm waters until 10 AM. Two public boat launches maintained by the state Department of Natural Resources (DNR) provide easy and free access to smaller boats.

Fishing is usually good at Powers Lake. Fish availability is monitored by the DNR. Among the species most often caught are largemouth bass, smallmouth bass, northern pike, walleye, bluegill and panfish. An annual ice fishing derby is held on Powers lake each winter. There are no marinas on the lake and it appears no bait or fishing tackle sales near the shore. In this area of many small lakes, several can be found nearby, however.

The heavily developed shore of Powers lake includes many higher-end homes. Because Powers Lake is only 40 miles from Milwaukee and 50 miles from Chicago, it has become an ideal place to own a lake home or to rent a vacation property. Most homes have their own docks, and larger boats can be launched from the ramps at the two town parks. The atmosphere is residential, with large yards and plenty of shade trees. Most home have their own narrow swim areas along the sandy, shallow shore. Many properties have been in the same family for several generations, with the facilities often being enlarged or rebuilt in recent years. Nearby towns such as Genoa City and Bloomfield offer most standard services, with Kenosha and Lake Michigan beaches only 30 miles to the east.

Powers Lake is only 15 minutes from the well-known resort community surrounding Lake Geneva. Something to please everyone is available on those days when the family wants to be out and about. Cruises are available on Lake Geneva, and a visit to Yerkes Observatory with the world's largest refracting telescope is always an option. Much of the 21-mile Lake Geneva shoreline is encompassed by a walking path. Other activities around Lake Geneva include Victorian mansion tours, a water park, the Belfry Music Theater and the East Troy Electric Railroad. Golf lovers will be pleased to find a noted golf club and resort just south of Powers Lake bordering Lakes Benedict and Tombeau. The resort is popular for weddings and banquets.

Those with a yen to observe nature will find the wooded environs at nearby New Munster Wildlife Area a fine place to observe a variety of birds, small mammals and waterfowl. Big Foot Beach State Park at Lake Geneva also offers several relatively short self-guided nature paths along with camping, swimming and picnic areas. The fun doesn't stop in winter as ice skating joins snowmobiling, cross-country skiing and snowshoeing to occupy outdoor adventurers in the surrounding area. The City of Kenosha also has a full range of activities to pique nearly everyone's interests, such as a Civil War Museum, live theater at historic Rhode Center for The Arts, and even lighthouses on Lake Michigan. Both Kenosha and Lake Geneva have a variety of restaurants, unusual shops and plenty of lodging choices. The entire southeastern Wisconsin area is filled with small hotels, guest cottages, inns and farm stays for your enjoyment.

Real estate is still available at Powers Lake, although there are few build-able lots directly on the lakefront still vacant. A couple of new housing developments in the area still have land available. No matter what your interests or family configuration, there is something at Powers Lake for you. Bring the fishing tackle and the water toys and come for a visit. You may find this is where you want to drop your anchor.

Kristin Stahulak
Real Estate
262-903-6298
kstahulak@keeferealestate.com
Get in touch and let the magic happen!

For ADA assistance, please email compliance@placester.com. If you experience difficulty in accessing any part of this website, email us.

Sign Up
Already a User? Sign In
You have been successfully registered
Please check your email.
Go to the homepage
Sorry something went wrong
Please try again.
Try again

Change password
Your password has been successfully reseted.
Go to the homepage
Sorry something went wrong
Please try again.
Try again
Already a User? Sign In